This is the brand new face of Pleasant Valley High School 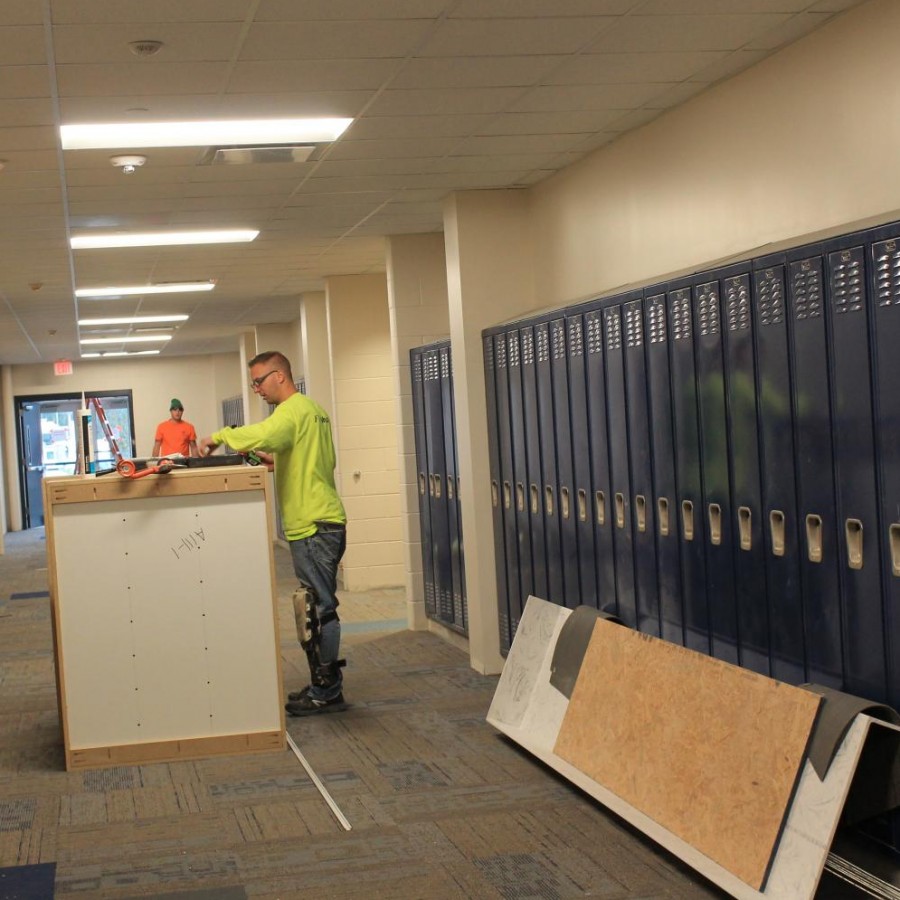 Construction worker, above, at Pleasant Valley working in the new addition

The new addition to Pleasant Valley High School has been a meticulously planned endeavor built to bring benefits never-before seen by students and faculty by Sunday, Nov. 4.

The Shield began reporting about the additions and building updates back in 2016, when the plans were first released. Since then, the process has been long and hasn’t been an easy one for anyone involved. The first part of the expansion was complete when the school saw a new student commons and office space in 2017. After the main office, guidance office, nurse’s office, new special education rooms, and the student commons was complete, the focus of the construction shifted to the three story tower and to the updates to the athletic facilities.

“The theme for the remodel is growth and adaptation,” said principal Mike Zimmer while exploring the new space. Passing a shining new classroom with a floor-to-ceiling window he remarked,“This one here doesn’t even have a teacher assigned to it yet, and we are prepared to fill up this space as need be.”

Each new space is a modern update to the standard Pleasant Valley classroom with far more natural light pouring in each window and plentiful amounts of room for students and staff. After passing through two floors of brand new space Zimmer said, “I’d show you the third floor, but it’s the same thing one floor up.”

From the exterior staircase surrounded by glass, one can view the progress of Parking Lot A. Zimmer said, “We’re going to have enough room for eighteen cars per row with a few rows reserved for faculty.” While a majority of this tour was focused on new business, some aspects were meant to stay the same. “It will be like we never tore up Lot A at the end of the 2017 school year.”

Looking down on the new gym from the elevated track is like looking down on a coliseum, and according to Zimmer, the project is only half complete. “We’ll knock down that exterior wall soon and build a mega-gym, and the current A gym will become a true performing arts center.”

Some of the project’s impressive features will likely go unseen by students. The boiler room, which controls all plumbing, electrics, and central AC/heating, takes up a space roughly the size of four classrooms and contains the latest in regulatory technology. It is a truly impressive heart for the new space, and given its size, it is sure to keep students and faculty comfortable.

The biggest area of change for most students will be in their physical education classes. The locker rooms and team areas are state-of-the-art and feature some new amenities. Individual showers have been put in places to give students a newfound sense of privacy, and locker rooms have been given added mirrors, sinks, and outlets for athletes looking to get ready after lifting.

Students will feel the effects of the addition for years to come. Zimmer said, “This is only phase one in what will be the future of Pleasant Valley High School.” The construction has opened the doors for expansions the current administration and school board leaders may not even have control over, and as the district continues to grow, more projects are likely in its future.