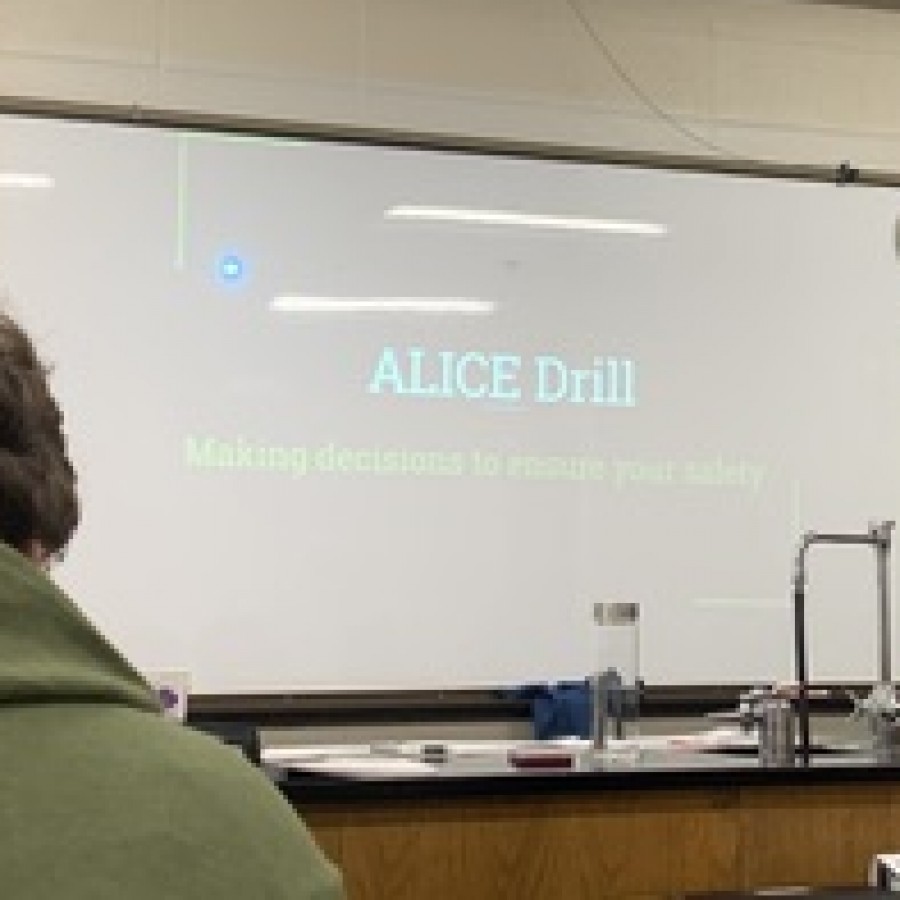 The lead slide on the Alice drill presentation, in a third period class.

The latest ALICE drill was an admission that the government has failed to protect students, prioritizing an AK-47 over a student’s life.

On Nov. 1, PV reserved 30 minutes of its schedule to present a lecture-styled powerpoint regarding the necessary action to take during a school shooting. PV has been participating in ALICE drills since 2015, however, this was the first presentation that essentially covered the “what ifs.”

While the school leads with good intentions, preparing students for the worst is a way of admitting that the government has failed to protect schools from gun violence.

Junior Muskan Basnet feels ALICE drills are important, however, “the fact that we have to have them in the first place says something about the way our country faces gun issues,” she said. “ALICE is reactive not proactive.”

The recent drill presented students with scenarios in which they discussed with peers. Instead of working as a nation to prevent the occurrence of school shootings, schools have accepted that they will take place and have taken action themselves in order to maintain a safe environment for its students.

Senior Hannah Lederman believes the drills can be two-sided. “The idea of it seems like it would be beneficial if we were ever in that situation, but I think if we were truly in the moment the amount of fear would outweigh the training and knowledge we have,” she said. “However, I still believe having these drills are better than not having them at all.”

Student opinions regarding the topic emphasize the idea that training is helpful, but not nearly as effective as new legislative would be.

Being proactive about the situation may be helpful short-term, but the long-term effects include a country full of hopeless young students who know their education is being compromised by 2nd Amendment voters.

On Nov. 14, a California school fell victim to a school shooting, losing two high schoolers. While the school participated in drills, those drills were not able to save all the individuals in the building. However, stricter laws potentially could.

Students are no longer asking for stricter gun laws, they are begging for them.

Schools are not responsible for school shootings; it is in the hands of the government to do something about it. In the meantime, schools will do everything in their ability to prevent the occurrence, however,  school shootings cannot simply be lectured away.

Senior Bell Luebken, among many others, is often scared to be at school. “There’s often times when I may be alone in the hall or bathroom and hear a noise and wonder if it’s a shooter,” she said. “Then I realize it’s another student and I can breathe again.”

Basnet mirrors Luebken’s comment. “Often, I find myself fearful of being at school knowing that at any given moment an intruder could walk into the building,” she said. “ ALICE drills remind me that this is a real issue that happens to schools all across the country and could happen to us.”

Lederman is yet another student who often thinks of this potential threat. “It’s not a thought that crosses my mind every day I walk into school, but if the intercom says to keep students in their rooms for whatever reason, I always think of the possibility,” she said.