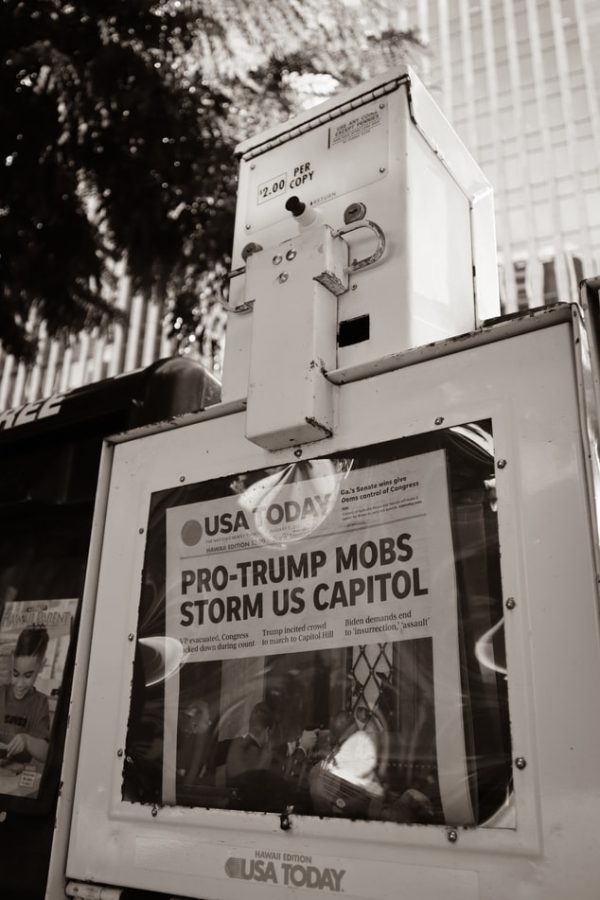 2021 did not even make it a week before the unity of our nation was tested. Going into a new year and new presidency, we need to work together to become better.

At merely six days old, 2021 had no trouble making room for itself in the history books. The day’s political events quickly turned south making for one of the darkest days in recent American history.

On Jan 6, there were a number of happenings. The coverage of Georgia’s run-off election for Senate and Congress’ meeting to certify Joe Biden’s presidential win started the day and filled the morning news. The afternoon, however, took over the spotlight when a mob of Trump supporters stormed the US Capitol in protest of the election results.

First, let me just say how incredibly disgusting and abhorrent this riot was. Disagreement with election results is not an acceptable reason to attack the Capitol building. Violence solves nothing, and that was clearly demonstrated the following morning when Congress moved forward as planned to declare Biden’s victory.

Senior Abby McKay agrees the violence shown at the Capitol was inadmissible. “I think that it went too far,” she said. “I understand they were protesting, but breaking into the Capitol is absolutely not okay. More people should have condemned the violence.”

The goal of the attack was insurrection, and rioters came with the intention of kidnapping and harming representatives. When a motive behind a riot becomes purposely violent for such disturbing reasons, it is no longer a riot – it is a terrorist attack.

These domestic terrorists intended to foster intimidation to overturn the results of the election solely because their ‘leader’ cannot accept defeat. The election is over; Biden won. It is disappointing when your choice of candidate does not win, but it is time for those denying the outcome to accept it and move on.

It is unfortunate to know the breach at the Capitol could have been avoided if Trump had accepted the election results sooner. His nearly two months of insisting on voter fraud and a stolen election have done nothing but stir his blind loyalists so far down into a hole of lies and denial that they apparently believe storming the Capitol will overturn election results.

Trump did not act alone in helping cause the coup. Senators Ted Cruz and Josh Hawley, as well as House Minority Leader Kevin McCarthy, all have spread Trump’s rigged election theory. In addition, all three Congressmen were a part of the 147 Republicans who objected to the counting of Biden’s electoral votes during a joint session between the House and the Senate.

What is worse, although at this point not surprising, is when the coup was unfolding, instead of shutting it down, Trump instigated more action by telling the domestic terrorists, “[w]e love you” and “you’re very special.” Telling domestic terrorists they are “special” and “loved” is beyond outrageous. People who partake in such disturbing attacks should not be supported and instead must understand the weight of their actions. As the leader of the ‘free world,’ Trump should have known that.

If places which are supposed to be safe and difficult to get into can be breached so easily, what does that mean for the security of other buildings across the nation? Americans should not have to worry about their safety in their own country, but if violence like what was displayed during the coup continues to happen, the concern regarding our safety will only continue to rise.

In response to the capitol riot, many social media platforms, including Facebook, YouTube, Twitter and even conservative favored Parlor have either suspended or banned Trump from their platforms.

It is a surprise to absolutely no one that Trump has used his platform to spread hate and lies  over the course of his presidency. He has repeatedly ridiculed US and world leaders, as well as mocked activists such as climate change advocate Greta Thunberg. Trump has also shared a considerable amount of false information concerning COVID-19 and voter fraud.

Senior Cassie Smith sees social media’s response to Trump as bitter sweet. “Although I respect these platforms for suspending his accounts, I wish this would have happened sooner,” she said. “By waiting until a few weeks before Trump leaves office, [social media] has given Trump a lenient platform through which he has spread falsities for four years.”

While the banishment or suspension was the right move to make by the platforms, it was a call that came too little too late. The removal of the president’s social media accounts should have been done years ago so none of what he posted could have ever seen the light of day.

We cannot achieve a happier, safer and more inclusive future by allowing darkness to lead us. Change needs to happen more now than ever, but it will only be achieved when people finally begin to work together and take responsibility for their actions.

Jan. 6 will be remembered as one of the darkest days in recent American history, and for good reason. But despite that, the day can still be looked on as an example of how Americans need to grow and become better in any and every way possible.