The war on Wall Street: How Reddit users beat the system 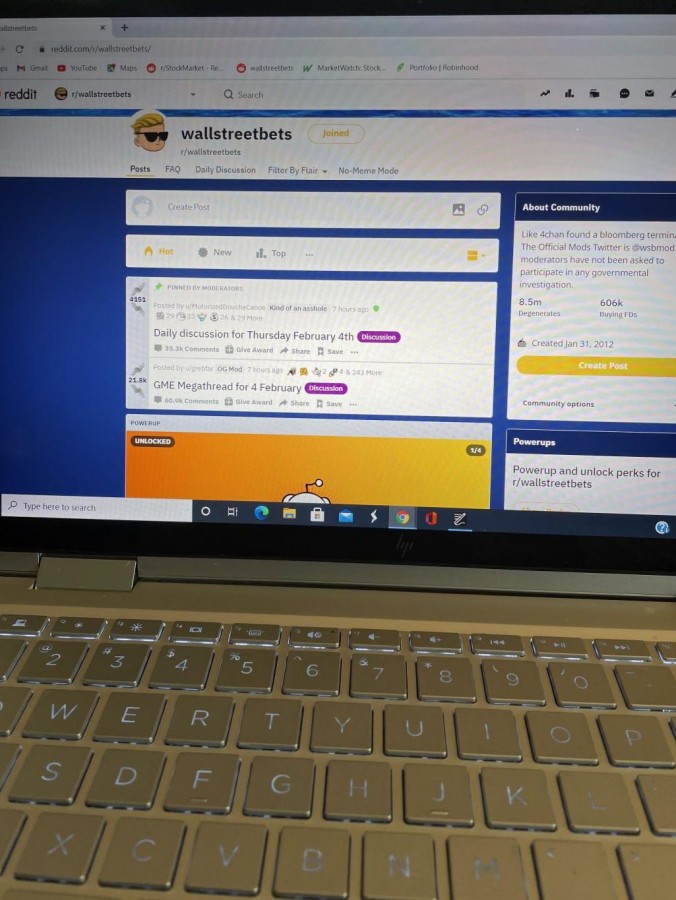 The popular Reddit page called Wall Street Bets that has taken the world by storm.

Those who work on Wall Street are known for screwing over the public. However, there has been a huge power shift thanks to a group named “Wall Street Bets” (WSB).

The group originated on the popular platform Reddit, where users could go to their page and see discussions about trends in the stock market, what strategies investors were using and receive advice from fellow traders. The page had always been known as being for the people,’ as they commonly looked for flaws in the trading moves of giant investment firms.

Many members of WSB had no respect for the large firms, who have been profiting off of the general publics’ losses in the stock market for decades. But on Jan. 27 and 28, WSB led an army into war against firms such as Citron Research, Point 72 and Melvin Capital.

Hobby analysts on the WSB page began to notice that these firms were shorting stocks like Gamestop ($GME), Blackberry ($BB) and AMC Entertainment Holdings ($AMC).

Shorting refers to a controversial strategy used by investment firms. The firm borrows a certain number of shares from an internal brokerage, sells the shares at a high price, watches the price of the shares plummet, only to buy the shares back at a much lower price and return them for profit.

The problem with this strategy is that if the stock price never ends up going down, the firms will have to cover their losses by buying more and more shares in the company, inevitably raising the share price. . Once news was shared to the rest of WSB about what Citron, Point 72 and Melvin were planning on doing, they began to see an opportunity to make a lot of money. If the WSB investors put enough money into Gamestop, AMC and Blackberry, they could not only screw over Wall Street, but make a killing in doing so.

The social media site Twitter was buzzing with tweets about Gamestop the night of Jan. 27. A majority of popular finance pages began hyping up the stock. Fox News, CNBC and the Wall Street Journal were all talking about Gamestop stock.

Michael VanDerSchaaf, a senior planning on studying Finance next fall, remembers the buzz throughout Pleasant Valley High School on the 27th. “It was insane. My friends and I all tried to sign up for investment accounts in order to buy Gamestop stock,” he said. “We all thought the price was never going to stop going up.”

However, on the morning of Jan. 28 the investment app Robinhood, the one used by most of WSB to make their trades, stopped the buying of any Gamestop, AMC and a few other stocks. As a result, the stock prices plummeted, preventing any of the share prices from reaching the goal set for them by the WSB page, which they simply referred to as “the moon”.

People were outraged by this and took to social media to voice their concern. Barstool Sports founder Dave Portnoy led the charge on his Twitter page, calling for the arrest of the Robinhood executives, stating that they had intentionally manipulated the market to protect Wall Street. Even polarized politicians like Sen. Ted Cruz and Rep. Alexandria Ocasio-Cortez spoke out on Twitter saying that what happened was wrong.

Those who had preached Robinhood in the previous weeks for its simplicity and lack of fees felt betrayed. Senior Jack Umland had been using Robinhood since last fall. “I had a few shares of Gamestop when Robinhood stopped allowing anyone to buy more shares. They still allowed us shareholders to sell, but the damage had already been done at that point,” he said.

The inability to trust a trading platform prevented many people from continuing to invest in Robinhood. VanDerSchaaf remembered his excitement the night of the 27th, but also how betrayed he felt the morning of the 28th. “After signing up for Robinhood and planning to invest through that platform, I chose to switch to another platform, WeBull, after Robinhood put restrictions on stocks such as Gamestop and AMC. I believed this was unfair to the market and I did not want to use a platform that hurts its consumers,” he explained.

Although the prices of the “memestocks” tanked that day, WSB still celebrated a victory. A majority of their members had made a lot of money that week off Gamestop, AMC, Nokia and Blackberry as they saw once in a lifetime percentage increases in the share prices.

The WSB crowd got a taste of victory against big firms like Melvin Capital, who lost 53 percent in the month of January thanks to a couple of posts on a Reddit page. Moreover, Andrew Left of Citron Research deleted his Twitter after he could not take the embarrassment anymore.