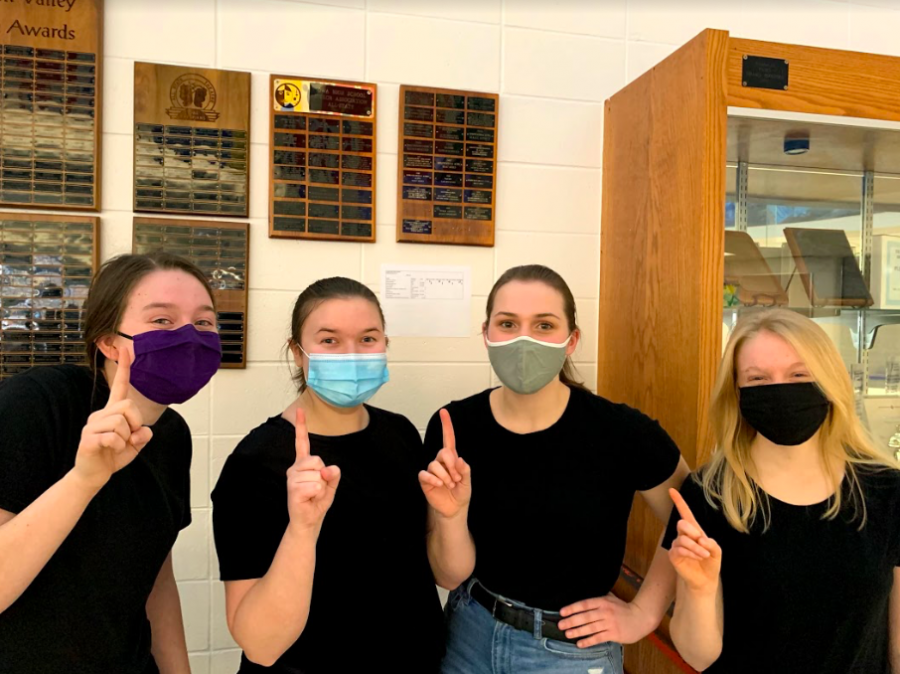 The musical theatre group “ Disenchanted” shows off their division one win.

On Feb. 5, PV participated in Large Group State Speech through the PV Spartan Drama Department. In order for qualification at the state conference, groups had to receive a rating of one at the District Large Group Speech event.

The COVID-19 pandemic changed what speech looked like this year. Instead of students traveling to different highschools to compete, a judge was brought to Pleasant Valley high school instead. This limited contact between people, allowing for speech to continue during this challenging year.

One of the fantastic shows that made it to state this year was the 10th through 12th grade one act “Postponing the Heat Death of the Universe,” which received a division one rating. This show was performed by seniors Emma Engler, Logan Croll and Lydia Cox. Alongside them, senior Maegan Neil, freshman Joshua Nelson, sophomores Arissa Khan and Lexi Pelzer assisted behind the scenes to help this show thrive.

“Postponing the Heat Death of the Universe” was directed by senior Jared Jones, who shared his experience as a student director. “It was honestly my favorite theater experience. The process has been fantastic with my small cast and crew from blocking the show in the black box and hallways of the school, to receiving three division ones at State Speech Contest,” said Jones.

Jones explained his favorite part of theater, shedding light on the joy it brings him. “The best parts about the show haven’t been performing, but rather bonding with my company: all the inside jokes, warm ups, Whitey’s runs and more. The people and friends involved are my favorite part of theater and why I love it,” said Jones.

The PV Improv teams had great performances at state, including their group, Hatrick, and its members: sophomore Miranda Croll, Caleb Swinney, and senior Erica Heiselman, who received a division one rating.

New to the PV Improv program this year are the ninth grade improv teams made possible by student mentor Morgan Web. This group was split into two different squads, grey and blue.

Guest explained his experience of the night, sharing his gratitude: “I thought it was amazing that we were able to even do Speech events this year. They made it covid safe, and some people in the drama department were able to have an audience while they performed.”

“The Stronger” ensemble acting piece was performed by sophomores Miranda Croll and Arissa Khan, who also were awarded with a division one in the 10th-12th grade competition.

A 10th through 12th grade group musical theatre piece called “Spring Awakening” completed the competition with a division one at state. This performance was performed by sophmores Ava Burmahl, Tommy Glennon and Caleb Swinny.

The freshman musical theater group, “Sisters/ Some Things Are Meant To Be,” was performed by freshmen Rupika Jai Ganesh and Celia Vondracek. They also joined the other groups in receiving a division one at state.

The 9th Ensemble Acting Group, “Empowered,” received a division two at state. This group was made up of freshmen Selah DeVore and Jae Jepsen.

Abby Shamrell explained the advantage of having Speech in house this year. “Speech this year was very different than my first three years, but I still really enjoyed it. We got to have a unique experience that not very many people get to have. Having our competitions in house was also very helpful in knowing our performance space,” Abby Shamrell stated.

Speech was made possible this year by the adult staff of the PV Spartan Drama Department. Francis Dunbar, the improv and 10th through 12th grade one act mentor, touched on this experience. “It is very satisfying to see the amount of work that was done for the students to have the opportunity to do Speech events this year,” he shared.

The Large Group State Speech competition was a great success for PV students. The PV Drama department continues to work through the challenges of the pandemic with keeping the opportunities open for students.