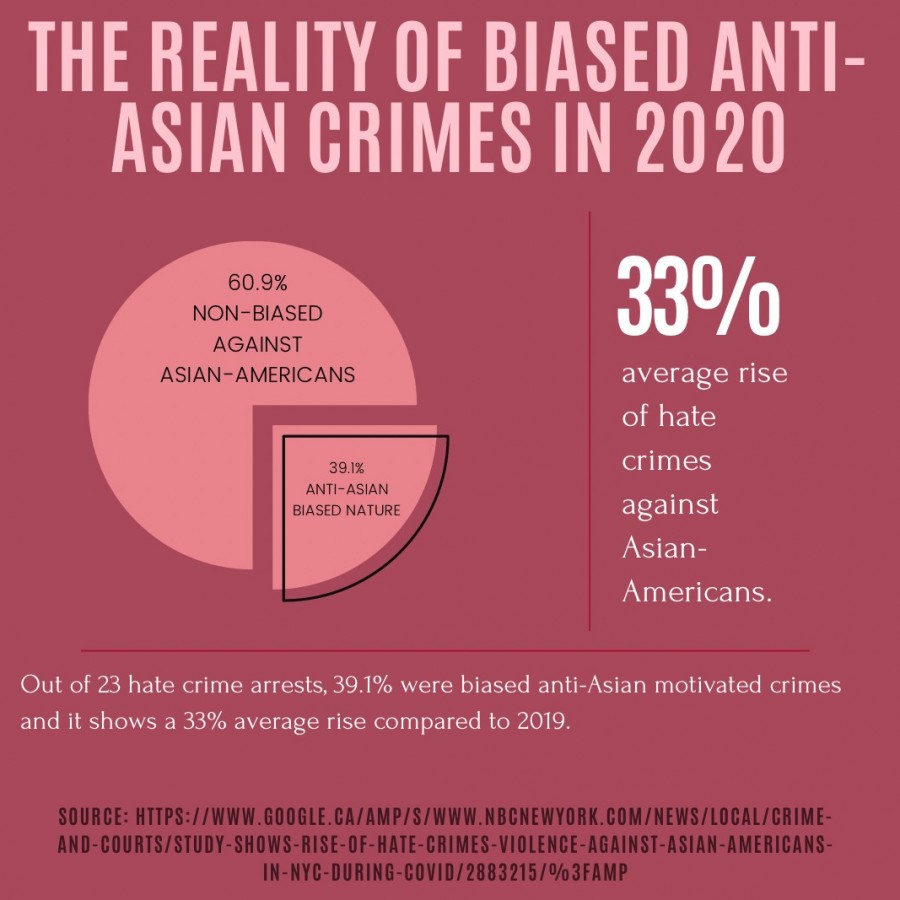 Statistics on the current rise in anti-Asian-American violence due to biased opinions from COVID-19.

Despite society claiming it strives for inclusivity and acceptance of all, COVID-19 has revealed the prejudice and discrimination it has against Asian Americans which has been hidden from plain sight for years.

The COVID-19 pandemic has forced people to address fundamental issues that received little attention before, one of them being an increase in the hate and discrimination towards Asian Americans.

While the racism towards Asian Americans has existed in the United States for centuries, it has only intensified with the onset of the pandemic.

It is known that the COVID-19 strain originated in Wuhan, China and somehow transmitted from animals to humans. At the beginning of the pandemic, Americans debated whether or not it was fair to blame China. However, the spread of the virus does not lie at the hands of Asian Americans.

Throughout the pandemic, violence against Asian Americans has risen significantly, but has only gained major media attention recently — and it is not being widely reported. The New York Police Department (NYPD) reported that hate crimes motivated by anti-Asian sentiment jumped 1900 percent in New York City in 2020. Unfortunately, most of this violence has targeted elders as well.

This trend has continued into 2021, motivating President Joe Biden to sign an executive order denouncing anti-Asian discrimination in response to the racial violence.

Many attribute the rise of hate crimes against Asian Americans to the previous president and his anti-Asian rhetoric during the ongoing pandemic. Trump repeatedly referred to COVID-19 as the “chinese virus” or “kung flu,” which suggested that China and Asians were at fault.

Senior Sandro Xiao, who is Chinese-American, explained his thoughts on how racism against Asian Americans has strengthened due to the pandemic.

“It’s expected that the outrage and confusion would be directed at Asian Americans if individuals in power maintain a xenophobic rhetoric through phrases like ‘Chinese virus,’‘Wuhan virus’, or ‘Kung flu.’  It is stigmatizing terminology,” he shared. “It alienates Asian Americans as “foreigners” and encourages hostility towards them because people need/want a party to blame.”

Racism towards Asian Americans most commonly appears in microaggressions. Whether it is using slurs or referencing common Asian features in a negative tone, Asian-Americans deal with racism in their everyday lives.

Senior Christina Li, another Chinese-American student, has dealt with racism within the walls of PV. “While in junior high, a guy yelled at me and called me a ch*nk and ‘small eyes’ just for standing in the hallway,” she divulged. “For the most part, it was just kids saying things like, ‘oh, you eat dogs’ or ‘your eyes are small.’”

Xiao has seen people in his family be discriminated against and even sees similar discrimination play out in the media.

“I’ve witnessed my immigrant mother be treated unfairly by being profiled as cheap or stupid because of her trouble with English.” he continued. “I think many of the issues stem from how Asian Americans are portrayed in the popular media, like how little coverage Andrew Yang was given in his presidential campaign, or the racist depiction of Asian American characters in Hollywood classics, like ‘Breakfast at Tiffany’s’ and ‘Sixteen Candles,’ or the white-washing of Asian American roles in movies.”

These small acts of racism increased and took a different tone during the pandemic. A stigma appeared surrounding Asian Americans, making people believe that they had something to do with the virus or they were more likely to be carriers of it.

Li had a specific experience with racism due to COVID-19 right before spring break. “Before spring break last year, I heard some kid next to me saying that his dad told him not to ‘speak to Chinese,’” she explained.

These experiences with racism stem from early legislation in the United States like the Chinese Exclusion Act of 1882, which restricted immigration after Americans on the west coast wrongfully attributed declining wages and economic ills to Chinese workers. One of the main motivations for this act being to maintain white “racial purity.”

These ideals have had long-lasting effects in the US and have not yet been fully addressed. It took COVID-19 for these issues to be fully recognized.

This summer there was an explosion of activism promoting racial equality with the Black Lives Matter (BLM) movement. While its main focus was the injustice black people have faced systemically, there were a lot of talks about the things minorities deal with living in the current climate in the United States.

Xiao thinks that the conversation tended to shy away from the issues that come with the experience of Asian Americans. “Over the summer, amidst the COVID outbreak and the BLM movement, I was especially disappointed by people marginalizing the Asian American experience. It really shouldn’t be a battle of who has experienced more severe prejudice or who has it worse off,” he lamented.

“It shouldn’t be acceptable to argue that because immigrant parents were raised under a backwards narrative, their mistreatment is defensible, and the same goes for holding Asian Americans accountable for the actions of the PRC, like we’re American too,” he continued.

The disappointment towards the rise in hate crimes and discrimination against Asian Americans is clear from many US citizens, especially within the Asian American community.

Xiao expressed his feelings towards the recent spike. “I’m simply disappointed with the attacks against Asian Americans. It’s pathetic, but I’m not surprised by the bigotry,” he voiced.

Li also shared her frustrations and anger towards the attacks against helpless elders and America’s response. “I definitely am angry about the attacks against Asian Americans,” she continued. “As of late, lots of the attacks have been on the elderly. I don’t understand what kind of person someone would have to be to go out of their way to attack a vulnerable elder simply for their race,” she said.

Society is confusing its hatred for COVID-19 with a hatred for the Asian community. Everyone wants someone to blame for the pandemic that has destroyed our way of life, but villainizing Asian Americans is unacceptable.

The attacks against Asian Americans shows the long history of discrimination in the United States that was catapulted by the anti-Asian rhetoric displayed by those in power, but we can and must do better.

“We cannot change what we are not aware of, and once we are aware we cannot help but change” – Sheryl Sandburg.