The decline of democracy: How voter suppression harms the nation 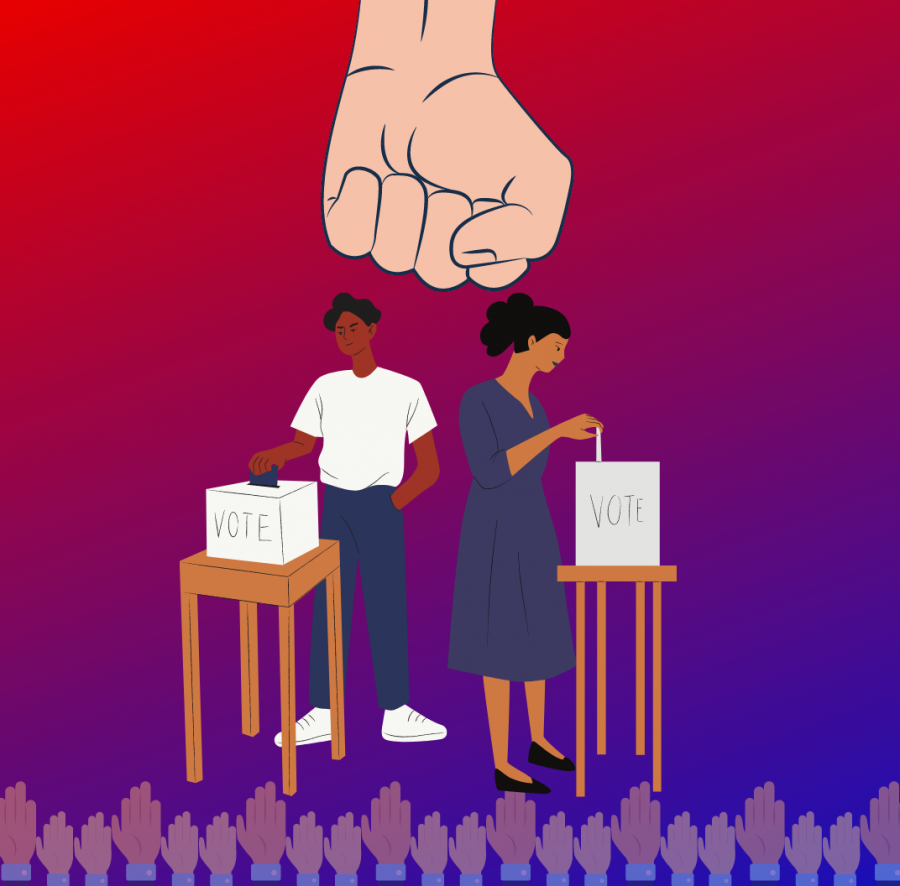 “Voter suppression in America has become more prevalent after the 2020 elections, yet is left unaddressed.”

The 2020 election caused significant turmoil and tension in America, with each party defending their beliefs on the validity of the election. Many Republicans believe election fraud led to President Joe Biden’s victory, while many Democrats believe the opposite. This issue was not abandoned in 2020.

Public integrity in the election process declined after the 2020 election. Former President Donald Trump’s unwarranted claims have convinced many voters the election was corrupted by fraud, thus leading to the end of his presidency.

This idea of voter fraud and suppression are not new issues, though. It has been around for centuries, but just recently, the topic of voter suppression has re-entered the conversation. The beginning of American democracy was founded upon voter suppression, with only land-owning white men being able to vote. Throughout the years, amendments were made to the Constitution allowing more inclusivity when it came to voting.

Now, many Republican lawmakers are working to enact legislation that makes it difficult for voters to play their role in America’s democracy, claiming these laws will reduce voter fraud in upcoming elections. In reality, America is reversing the progress that has been made in the last couple of centuries.

The state of Georgia passed The Election Integrity Act of 2021 on March 25, 2021, enacting stricter voting laws throughout the state. Some of the changes made to voting in Georgia include strict ID requirements for absentee ballots, lessened time to request absentee ballots and misdemeanor charges for offering food or water to voters waiting in lines.

Previously in Georgia, voters were required to sign their absentee ballots, but now they must provide their driver’s license or identification. This can create problems because if voters misprint any information on the ballot, their vote will become invalid. Stricter ID laws also impact minorities disproportionately. The assumption that everyone has a valid ID allowing them to vote is false, and it discriminates against minorities.

Voters are allowed to use a handgun license to vote but not a state university student ID. Over 80 percent of handgun licenses that were issued in Texas in 2018 were to white people. Over half of the students in the University of Texas system are racial or ethnic minorities. Seemingly harmless ID laws are not as helpful as many believe; instead they suppress minority voices.

Among all of the changes made in Georgia, the risk of misdemeanor charges for offering food and water to people waiting in lines is one of the most outrageous. Food and water are helpful to voters waiting in often unbearable weather conditions and long lines. This is inevitably going to discourage people from densely populated areas to vote.

In populous places like cities, which tend to vote democratic, long lines are a given. But it is not just that those areas are dense with people; they are also poorer areas. So, anyone who is unwilling to wait in line without food or water for hours in hot weather will not be able to get their vote in. The voices of the poor living in these populous areas will be silenced, and their voices are fighting for some of the most important changes.

Senior Morgan Sorenson believes laws like these are detrimental to democracy. “These laws will make voting more difficult for Americans, and they will have no voice in politics anymore. We will start to lose sight of what democracy means,” she said.

In addition to Georgia, other states like Florida, Arizona, Missouri and South Carolina are also considering passing stricter voting laws.

With fewer people being able to vote, there will be a lack of representation in the elections to come. This will be an extreme change compared to the voter turnout in the 2020 election, which had the largest voter turnout since 1900.

Often times, people do not fully consider the implications of stricter voting laws. Senior Taze Wilson is among those who recognized this as a growing problem in our democracy. “People seem too willing to narrow their definition of voter suppression. They think voter suppression is just stopping someone from voting while it’s also making it harder to vote, such as Georgia’s recent bill,” he explained.

“The recent wave of people and companies calling out this less than obvious form of voter suppress is essential, or else the voter suppression will only get worse,” Wilson continued. The importance of awareness cannot be underestimated.

House Democrats have recently passed a bill to combat Republican efforts to tighten voting laws: the For The People Act of 2021. The bill itself focuses on expanding voting rights, impacting the transparency of campaign finance and changing redistricting laws.

Some of the most unknown and suspicious parts of the election process will be disclosed to the public, leading to greater transparency and well-informed voters. Requiring independent commissions to approve newly drawn districts would start the process of abolishing gerrymandering. These precautions will give constituents the proper representation they deserve. A step like this is a step in the right direction for underrepresented communities across the country.

The changes made to voting in 2020 made voting easier for Americans. Opening up voting is critical for democracy. This bill will allow more Americans to vote in the upcoming elections, rather than suppress their voice as other bills have done.

The next step is for the bill to go to the Senate; however that might be where the bill stops in its tracks. As Senate Democrats plan on supporting the bill, Senate Republicans have made it clear they will do anything in their power to make sure the bill does not progress further.

It can be easy to notice a national issue and not take a stand against it, especially when it seems like a distant issue. But these issues are closer to home than many might believe.

These changes in legislation are happening nationally, including Iowa. Governor Kim Reynolds signed legislation that has shortened Iowa’s early voting period and closed voting polls an hour earlier on Election Day. These changes to voting laws are inhibiting voters from having a voice in their government.

It is crucial for Iowans to take a stand against legislation that suppresses their voices. Contacting legislators, like Reynolds, can let local and state governments know what their constituents want. Voicing your concerns should not be the only action taken, though. Using your vote to remove legislators who continue to suppress voters from office is one way we can make a direct change.

The power of the people lies in their votes. Voting people into office who are fighting for American voices to be heard will decrease voter suppression across the country and increase voter turnout in future elections. We must elect legislators who are willing to fight for a democracy that is accessible to all.