Liberty and justice for all: The history behind America’s pledge 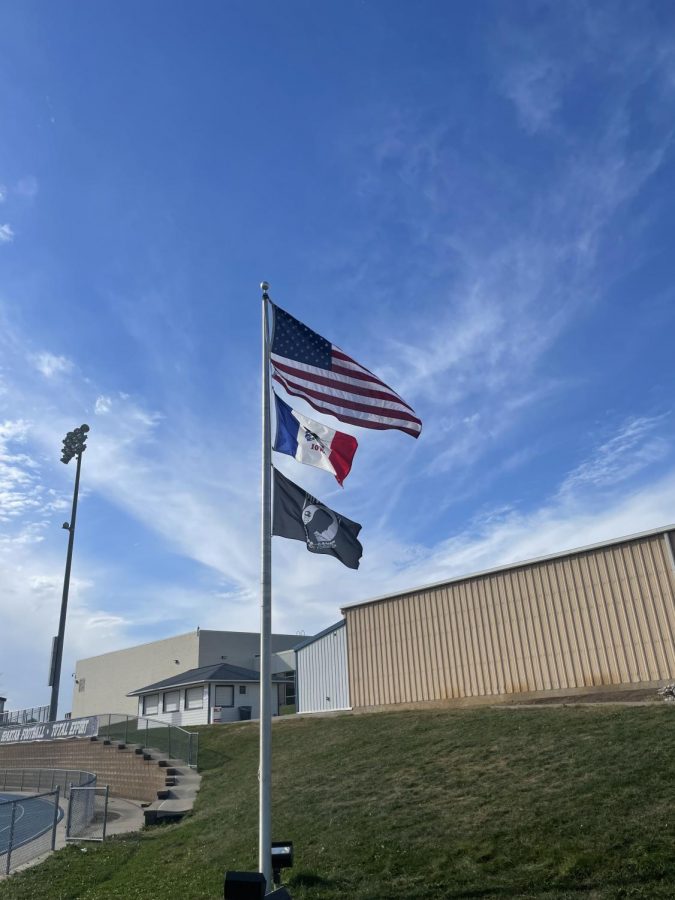 The American flag is seen flying in front of Pleasant Valley High School on a Sunday evening.

Within the classrooms of Pleasant Valley High School, 1,600 students stand, place their hands over their hearts and recite the Pledge of Allegiance everyday during third period due to the implementation of new Iowa legislation.

In a society lacking unity, Francis Bellamy, former Baptist preacher and Christian minister, scripted the original 23-word Pledge of Allegiance that would prove to transform the way Americans exemplified their traditional values in the late 1800s.

Amy Crawford, contributing author in the Smithsonian magazine, examined the history behind the Pledge. “In a series of speeches and editorials that were equal parts marketing, political theory and racism, Francis Bellamy argued that  ‘every alien immigrant of inferior race,’ eroded traditional values, and that pledging allegiance would ensure ‘that the distinctive principles of true Americanism will not perish as long as free, public education endures’,” Crawford quoted.

Essentially, Bellamy hoped to restore unity in the lives of American citizens by preserving his perception of true American values.

Following the original scripture, the draft contained several moving pieces within its anatomical structure. Possibly the most significant revision made to the Pledge was the addition of the phrase “under God.” Made in 1954 by the Knights of Columbus, a Catholic fraternal organization, this suggestion was implemented to distinguish American political ideologies from the Communist agenda of the Soviet Union. In addition to this proposal, “my flag” was replaced by “the Flag of the United States of America” to ensure that new American citizens affirmed loyalty to the U.S.

Along with the direct alterations of the Pledge, the former Bellamy salute–a gesture with a fully extended arm toward the American flag–was replaced with a hand over the heart during the recitation.

While PV students rise to restate the pledge every morning, only few recognize the reason behind the daily recitation. According to Iowa State Representative Carter Nordman, “We don’t pledge our allegiance to a government or a leader. We pledge our loyalty to an idea – the American idea. We pledge our loyalty to the greatest social experiment to ever happen on this planet. This is why I believe the Pledge of Allegiance is so important,” he said.

Schools instill the Pledge to incorporate patriotism into the lives of American students. PV senior Will Fairman shared his perspective on the newly implemented legislation pushing for the Pledge of Allegiance in the Iowa educational system.

“I think the pledge is unnecessary. I am all for patriotism and loving your country; however, the Pledge does not need to be said every morning. Since infancy, I have been taught to recite the Pledge, but I have not been taught the content or history behind it. If I don’t know it’s meaning, why should I be required to stand and say it? To me it seems like blind patriotism and partially resembles propaganda,” he stated.

On the other side of the spectrum, PV student Connor Riley expressed his opinion on the daily recitation of the Pledge. “I think the Pledge is a good way to remind students of their opportunities and freedoms offered every day at school. Not only does the Pledge unify the student body, but it also provides a patriotic stand in our school day,” he claimed.

The Pledge of Allegiance represents American traditions and loyalty, regardless of one’s opinion about it. Though the Pledge has been revised since its original scripture, its addition to Iowa’s educational legislation serves as a daily reminder of traditional American values.