The 13 best scary movies to get in the Halloween spirit 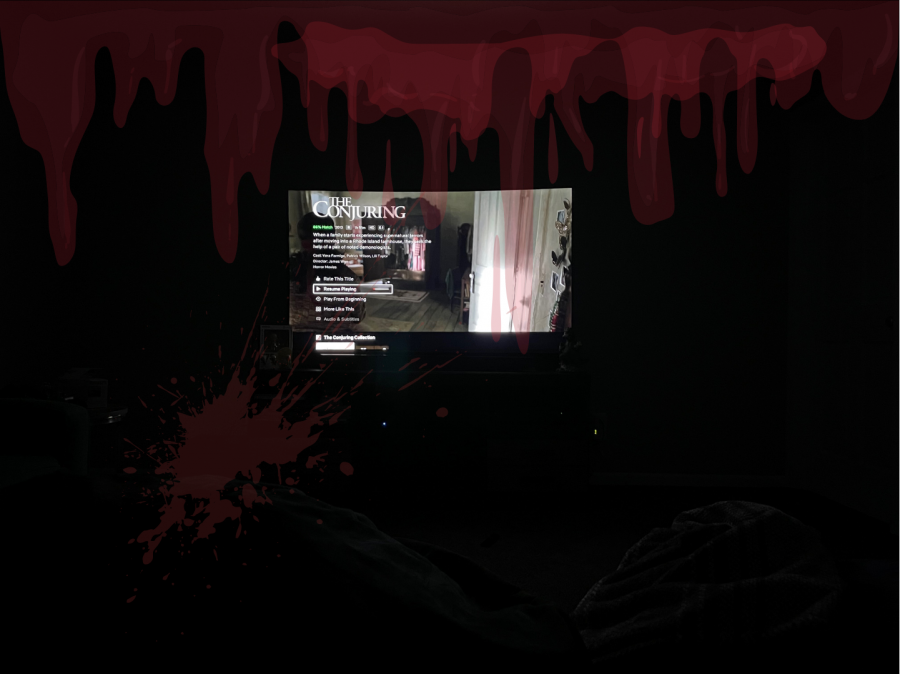 “The Conjuring,” one of the 13 on the list plays, on Netflix.

With October just starting, Halloween is quickly approaching. In order to get ready for this spooky season, a movie night consisting of some of the best scary movies would do the trick. To enhance the experience, turn off the lights and cozy up under a blanket, ready to hide from all the new monsters that might be lurking in the shadows.

This list provides 13 amazing scary movies, in no particular order, to get in the Halloween spirit.

With a name just as iconic and well known as the holiday itself, this movie is characterized as a slasher film,and creates one of the most well-known villains of all time, Micheal Myers. This movie is truly a classic Halloween movie that just happens to be scary. The franchise has been resurrected for the making of three more sequels (2018, 2021, 2022) which are almost as good as the original.

Coming from a children’s book, the monster The Babadook is every child’s worst nightmare. Throughout the movie, the viewers can see the apparent parallels between the monster and mental illness. The consistent haunting atmosphere leaves the movie absolutely terrifying as you start to question what is real.

Directed by Alfred Hitchcock, the master of suspense, this movie brings to life many memorable moments all while being set in the iconic Bates Motel. The whole movie is filled with suspense and ends with a huge twist. In order to preserve the ending, latecomers were not allowed to enter while it was being shown in theaters. When you watch the movie, check out if you can see Hitchcock make one of his famous cameos!

Created during the COVID-19 pandemic, this new type of film set entirely over Zoom introduced a new spin on scary movies. Even with each actor filming separately, there isn’t a disconnect between the characters and flow of the story. With a run time of only 57 minutes, the movie is packed with jump scares and creepy moments to keep you on your toes.

Set in a world where horror movies exist, the teenage characters like to tease the classic “scary movie” cliches that they eventually fall into themselves. With an enjoyable mix of comedy, jump scares and a twist ending, the movie is a perfect introduction to scary movies that will leave you wanting to watch more. Following this movie, there are three sequels, and there is one more to be released in 2022.

Based on true events, this movie will leave you scared of the dark and whatever lies in it. The demonic possession we rarely ever see in movies nowadays is very much prevalent and scary. After the success of this movie, many spin offs and a sequel were created.

Scaring you into never wanting to visit the Swedish countryside, this film has an interesting take on horror. The movie revolves around a pagan cult, unlike any seen in a film on this list, and  will easily mess with your mind and leave you a little messed up after watching. In the very end, as the credits start to roll, you will be asking yourself, “What just happened?”

This movie, written by two men who grew up in Bettendorf, Iowa, leaves audience members agreeing that living in silence has never been so terrifying. Unlike any horror movie you have ever seen before, the eerie silence this movie  is filled with creates an everlasting suspense throughout the film. Although it may sound boring, the movie consists of lots of fight scenes with out-of-this-world creatures.

As one of the best zombie movies ever created, this Korean film is downright scary. The high energy film is a mix of horror, action, mystery and thriller genres. The heart-pounding and bittersweet memory leaves the audience ready to watch the sequel.

Easily one of the best movies based on a Stephen King novel, this film centers around a famous writer and a crazy obsessed fan. These two characters carry the entire plot on their backs, doing so well that the audience gets invested in each of the characters’ lives. As one of my personal favorites, this movie does not seem too scary at first, but the suspense slowly starts to creep in as the story progresses.

This German psychological thriller confuses the audience as we are left to wonder if Mother, whose face is wrapped in bandages, is actually who she says she is. If you are up to reading subtitles, this movie is a memorable one. The trailer tricks you into thinking the film is predictable, unoriginal and boring, but the unsettling nature and surprise ending will leave you shell-shocked and confused.

Audience members everywhere can clearly say this movie is a cultural phenomenon. Instead of portraying a normal villian with a need to kill anyone and everyone, the film explores what the racially motivated anxiety of being a Black person feels like. This alone to someone who is unfamiliar with this feeling is terrifying and uncomfortable. The movie doesn’t stop there, but you will have to watch it to know the rest.

There isn’t a better way to end the best 13 movies to get you in a Halloween mood than with Friday the 13th. The release of the first film in 1980 sparked a franchise of 12 movies to be created. Starring the renowned killer Jason, these movies are unforgettable. It is important to stick it out and watch the second film that was released 1981 to get a full taste of Jason’s character.