The overturn of Roe v. Wade: Why should I care? 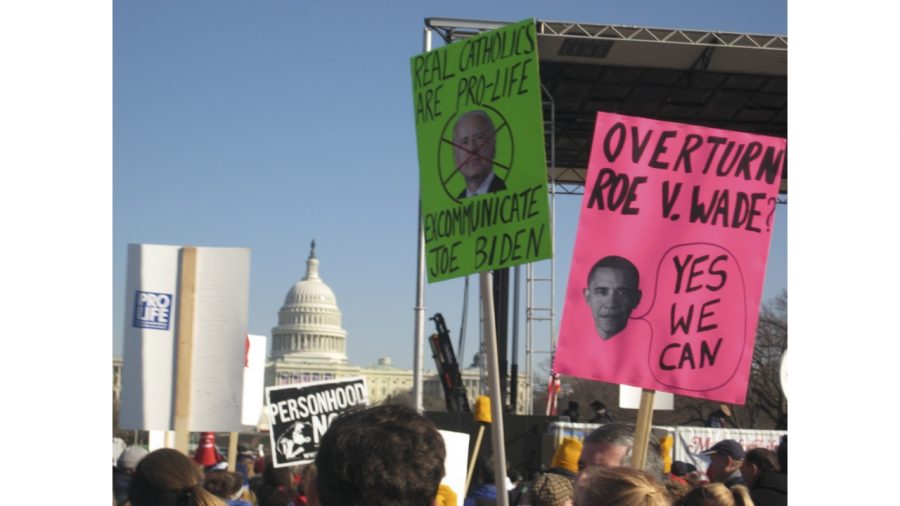 Protesters advocate their opinions on abortion and Roe v. Wade’s moral composition at a 2009 March for Life protest during Obama’s presidency.

The historic Roe v. Wade Supreme Court case revolutionized the political rights and boundaries of living as a woman in the United States. Its principles provided pregnant women with the right to terminate their pregnancy, regardless of the reasoning for conception: rape, incest, accident. Roe v. Wade gave women the right of choice and marked the beginning of a woman’s right to choose for the last 48 years.

July 2022 will bring the deadline for the U.S. Supreme Court justices’ decision of whether Roe v. Wade is truly a right protected by the Constitution.

Sparked by the Mississippi abortion law, which is expected to ban abortions after the 15-week pregnancy mark, Roe v. Wade shortly became the topic of discussion for its moral purpose and legal obligation to the unborn. The Mississippi law was originally proposed and enacted in 2018, but due to immediate legal challenges, it never went into effect.

Following the retirement of Justice Anthony M. Kennedy, an abortion rights activist, as well as the passing of Justice Ruth Bader Ginsburg, many conservative states have seen this as an opportunity to bring back the past Mississippi abortion conversation.

As the court is now dominated with six conservative justices in Brett Kavanaugh, Amy Barrett, Neil Gorsuch, John Roberts, Samuel Alito and Clarence Thomas, for the first time in decades, there is an apparent slant in political views. This has many more liberal-minded Americans concerned whether the court will make their decision based on the majoral opinion of the population on abortion, or will this swing the decision on abortion based on the personal beliefs of the justices?

The overturn of Roe v. Wade would bring on the states’ freedom to create their own legislation regarding abortion laws, many of which already have trigger laws prepared should they be allowed to pass them. With more than 20 states waiting for the decision on Roe v. Wade, the trigger laws between them exhibit a variety of different reactions: the permanent ban of abortion, previously enacted laws that are currently unable to take effect and pregnancy length restrictions for when a legal abortion may be performed.

It is evident that many powerful people in high standings of the government have clear opinions on moving forward with abortion rights. This has caused many to question whether decisions related to Roe v. Wade will be made based on the personal opinions of government officials or on the opinions of the public.

In Iowa, it was no surprise when Gov. Kim Reynolds joined the conversation in support of the Roe v. Wade overturn. As Iowa already maintains its heartbeat law, which prevents most  abortions with the presence of a fetal heartbeat, leaving legislation up to the state will define Iowa as a state that forces women to find abortion freedom elsewhere.

Reynolds defended her position in a statement saying, “For years, democratically elected representatives in states like Iowa have tried to defend innocent human life only to be stymied by the Supreme Court’s decision in Roe v. Wade. For too long, this precedent has trampled on state sovereignty and destroyed the lives of millions of unborn babies. I am proud to join with governors from across the country to take a stand for life and democratic self-government.”

Barrett, Republican Associate Justice of the Supreme Court, who opposes abortion rights shared, “Previous rulings requiring abortion access emphasize the burdens of parenting, but because women can put babies up for adoption, these burdens are not an issue.”

While many red states throughout the country are preparing their anti-abortion legislation, other liberal-leaning states are anticipating to change the medical licensing requirements in order to expand the amount of doctors able to perform abortions. This change will allow physician’s assistants to legally perform abortions alongside physicians.

However, despite this extension of medical licensing, it is still legally required of hospitals, doctors offices, etc. to protect the rights of doctors and nurses whose religious or moral ideas conflict with performing an abortion. Consequently, this provides another obstacle of Roe v. Wade’s assumed overturn as abortions become more and more difficult to access.

Roe v. Wade is among the most revolutionary Supreme Court cases in the U.S, changing legislation radically. But, as tensions continue to rise, is a case many Americans consider to be a staple of the legal system going to withstand today’s Supreme Court?