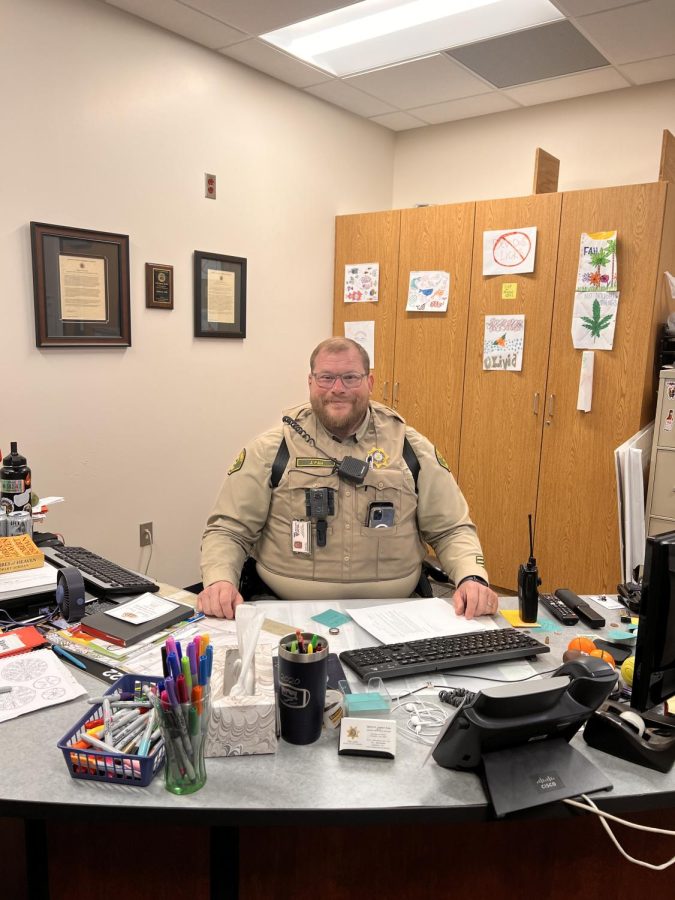 PV's SRO, Deputy Fah, has done all he can to make a more positive environment at the high school.

School Resources Officers (SROs) are responsible for keeping schools safe by responding to potential threats, breaking up fights and conducting drills with students and staff. There is a general triad from the National Association of School Resources Officers (NASRO) that encompasses their duties: law enforcement, informal counselor and mentor and coach, guest speaker and teacher.

When there is an opening for an SRO position, the school district schedules with the county to do interviews with potential candidates. Officers then undergo a series of interviews with county sheriff’s office employees and the school’s administrators. The school then selects who they feel is the best fit.

Here at PV, the SRO, Deputy Jamey Fah, has gone beyond all expectations to become someone that the students can look towards for anything. Rather than being feared, he is respected and relied upon. Within the last month, Fah deservingly won the Citation for Outstanding Achievement.

Fah became a sheriff’s deputy in 2013. During his college years, Fah was a wrestling coach for PV, and in 2016, he started coaching football at Pleasant Valley Junior High and wrestling at the high school once again. This reignited his passion for working with kids, so when an SRO position opened at the junior high, he applied. Another officer was selected, but a few months later, another position opened at the high school which he was chosen for. “I really wanted to come back into this environment and work with kids to make my difference that way,” Fah explained.

Going into this position, Fah wanted to be someone that students could look towards for guidance and advice rather than someone who only enforces the law. He takes time out of his day to sit with students at lunch, acknowledge those who are doing well in school and stay up to date with sports and the arts. During passing periods, he is always seen talking and laughing with students. Junior Reagan Hassel has created a positive relationship with Fah. “Not only does Fah do great work, he also finds time to reach out to every student he can,” she said.

These small acts have made a major impact on the student body. He is an authority figure that students feel comfortable going to with issues beyond school.

Within the span of 10 days, Fah successfully prevented two students from taking their own lives. In one instance, on Jan. 28, another officer contacted Fah saying he received information that a student had made posts hinting toward self-harm. The actual name of the student was unknown, so Fah took the time to search social media in order to find the student. He was eventually able to contact them, and the two were able to talk through the situation.

Shortly after, a group of students approached Fah in school explaining that one of their friends had been sending goodbye messages which is a common indicator that someone is planning to commit suicide. The student’s parents were contacted, but they were not home at the time so Fah stepped in. With the help of the Bettendorf Police and neighbors, Fah and a few other officers were able to get inside the home.

Here, they found the student unresponsive from an overdose on prescription drugs where they quickly administered Narcan to reverse the effects which saved the student’s life. Both students are still in contact with Fah and are doing better.

The fact that these students were able to rely on Fah in a time of crisis shows how his efforts to connect with students have been successful. “Most students feel comfortable talking to him about anything because of the way he builds relationships,” Hassel explained.

Fah has helped to create a more positive and safe environment within the school. The students and staff of Pleasant Valley send their gratitude to Deputy Fah and all he does.