There is a pattern. Each time a group of people experiences a tragedy, they come together. They speak out, making sure no one is able to ignore them. This Valentine’s Day, the community surrounding Marjory Stoneman Douglas High School in Parkland, Florida did just this. On a day when people are supposed to show love and gratitude to their loved ones, many were unable to do so because student lives were taken.

This event sparked many reactions, mainly from people desiring some sort of gun reform. Just one of these was a student lie-in at The White House on Monday, February 19. Accompanied by the signs and posters they had made, the students laid on the White House lawn shouting the names of those who were lost in the shooting. The idea started on a Facebook page called ‘Teens for Gun Reform’ with a post stating the following, “By doing this we will make a statement on the atrocities which have been committed due to the lack of gun control, and send a powerful message to our government that they must take action now.” The protest lasted only minutes to show just how quickly someone in the United States can obtain a weapon and commit a crime.

In Iowa City there was a cry for change as well. Students realized that this type of event could happen anywhere and something needs to be done about that. On the morning of Monday, Feb. 19, over 200 students from City High, West High and South East Junior High wanted to make a statement. The students left school and walked to the Pentacrest on the University of Iowa campus. They marched through the streets of downtown Iowa City yelling into megaphones. “At this point, you’re either with us or against us,” one student called out. “We are dying, and I’m not going to stand for it anymore.” Students are feeling more and more unsafe at school, which is something these students felt needed to be made more clear.

There have been many calls for help around the country, but of course the students from Marjory Stoneman Douglas High School are seeking reform as well. While they should have been going to another average school day, they were instead at another funeral on the morning of Tuesday, Feb. 20. Once the funeral was done they packed buses to head to Tallahassee to demand more gun control. Americans are used to failure at this point when it comes to more regulations to owning guns. These students were hoping to surprise the country by finally being successful in keeping this country safe. “We definitely have a moral obligations to do something, considering that so many people that we know passed,” stated one student. “These adults, these politicians, these lawmakers, these legislators, they were supposed to protect us. And they didn’t.”

This community, considered one of the safest in the country, has made it known that Americans need to come together to keep the future of the United States safe. Without hesitation, citizens have been showing their support in a way never seen before, hoping for a solution they’ve been waiting on for years. 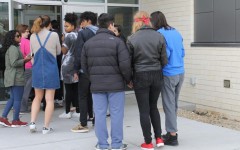 Bumpstocks: the beginning of the end?

On October 1, 2017, the bustling Las Vegas Strip was filled with music from the Route 91 Harvest music festival. With the festival in full swing on th...

Editorial: We are the change

The fifth anniversary of the Sandy Hook shooting passed with little recognition last December. In the elapsed time since the tragedy took place, it fe...