United or divided: Fighting for the future of the Republican Party 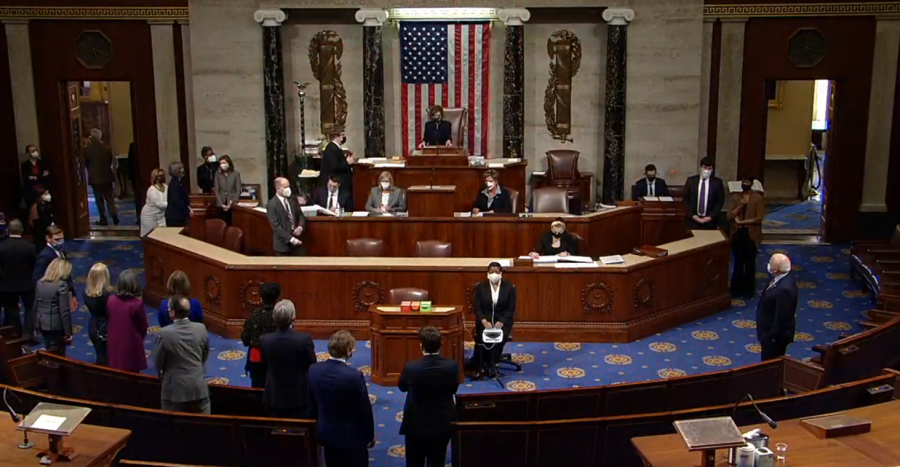 The House of Representatives votes in favor of impeaching former President Donald J. Trump for the second time on Jan. 13, 2021. Questions and concerns over the future of the Republican Party have risen after the division following the impeachment and Trump’s actions throughout his presidency.

In the world of politics within the past few weeks, the word “unity” has generated substantial buzz as politicians strive to bring the country together again following the controversial presidency of Donald J. Trump. However, recently among members of the Republican Party, very little unity is to be found.

While the media and President Joe Biden focus on his first 100 days in office, Congress has maintained its concentration on Trump’s second impeachment — an event that caused a schism among the members of the Republican Party when 10 members of the party crossed party lines to vote in favor of impeaching Trump in the House of Representatives on Jan. 13.

Although it is not uncommon for members of Congress to vote in favor of impeaching candidates of their own party, proven when members of the Democratic Party did so in former president Bill Clinton’s 1998 impeachment, more than twice the number of representatives voted to impeach Trump and faced heavy criticism and backlash from within the party. The condemnations and disconnect between party members have left citizens wondering what the future holds for the Republican Party.

Sara Russell, who teaches government at PV, attributes this backlash and divide to the different directions that members of the Republican Party wish to take it in the future. “I think we are still seeing the effects of the Trump presidency on the Republican Party, with some moving forward and others still showing their allegiance to the former president,” she shared.

The great chasm between members — with some pushing to reorient post-Trump and others continuing pro-Trump politics — of the party to determine what truly represents the “heart and soul” of the party in the coming years poses another internal dilemma: who will hold the power?

Based on the two party political system within America, many are skeptical of the party splitting into factions, as it would substantially diminish their federal power and momentum. “If the Republican Party was to split into factions, they would be creating at least two minor parties,” explained Russell. “While those candidates could gain support in local, state, and congressional elections, it is unlikely they could win the presidency against a united Democratic Party.”

However, Republicans in the House of Representatives have not been able to effectively align themselves with one future or another.

On Feb. 3, the House of Representatives voted to keep Representative Liz Cheney, the third most powerful Republican in the House, in her leadership position after other House Republicans attempted to oust her following her voting to impeach Trump. At the same time, only 11 members of the party voted to strip Representative Marjorie Greene Taylor, who has faced public outrage due to her racist and extremist views, of her committee assignments.

These two women are representative of the two directions the Republican Party is likely to head in, although neither vision is able to garner the support of the majority, which only adds to the conflict, something that junior Will Fairman thinks is damaging to the party.

“The unusual amount of division and, for lack of a better term, infighting offers practically no benefits for the republicans,” he said. “It also gives them a bad look. Who wants to vote for a party that can’t deal with its problems swiftly or come to general agreements on big issues?”

Fairman also believes that the idea of unity is important for the Republican Party to avoid alienating voters. “If the tensions among the party continue, so will the concerns of voters. To show they can solve the problems of the nation, they need to first display they can solve their own,” he shared.

Whether the Republican Party decides to reorient and refresh post-Trump, or continue to follow his ideology and agenda is unknown at this time, however, the contrasting visions for the future of the party remain clear, with both sides continuing to fight for the future.